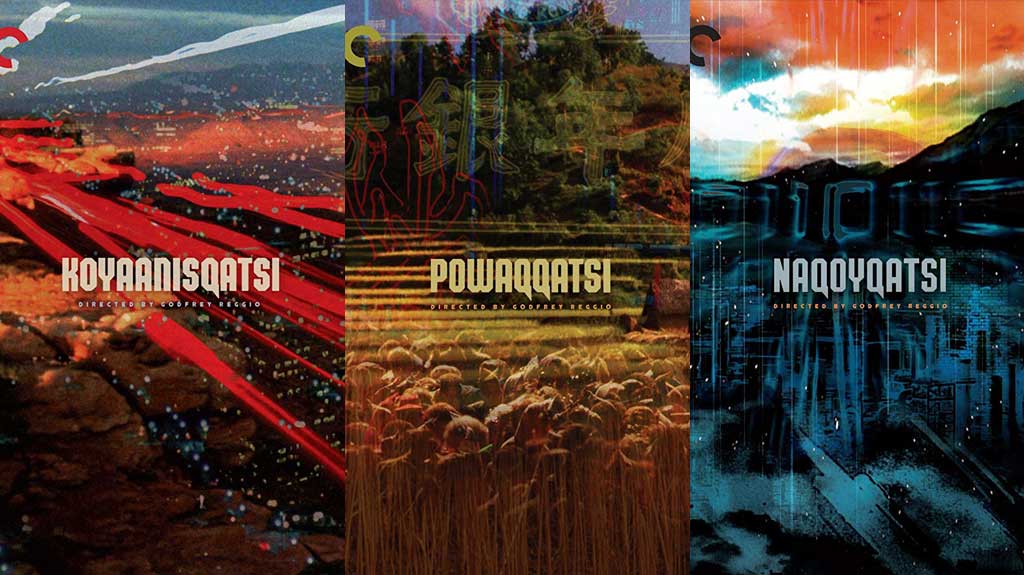 I found it hard to start writing about this. Therefore, I can only imagine how hard it would have been to start filming it, then editing it, and scoring it. The angle must have been very specific, very precise; otherwise everyone, from the filmmakers to the viewers, would be lost in translation. Or was it? Experimental filmmaking explores, challenges, discovers, even alters non-narrative forms of expression. The Qatsi Trilogy aims to carefully showcase what you already know without being pedantic.

The purpose of this article is not to fully lay it out for you but to pique your interest, maybe get you to watch it, and then urge you to challenge my point of view or even the filmmakers’ point of view regarding its meaning (a word that you will encounter a lot). But get you to know it nonetheless. All three titles are in the Hopi language, and the only thing I will disclose is that Qatsi means life. Now, you have two options: If you watch each documentary and wait until the end to see what each title means, you will look back and only retrospectively you will make the associations with what you saw, comparing it to your interpretations. If you find out beforehand, you will let the filmmakers do the interpretation for you without having the chance to make up your mind first. It is entirely up to you though.

As for the documentaries themselves, Godfrey Reggio is the man behind their creation. Philip Glass has composed the music and, among others, Godfrey Reggio, Francis Ford Coppola, George Lucas, and Steven Soderbergh are behind the trilogy’s production. Though tempting, the numerous editing techniques and the ‘how montage creates meaning’ analysis have been left out as, in order to be fully developed, I would have to write a doctoral thesis. The same applies for Philip Glass’ staggering music. What’s important, as a viewer, is the trilogy’s understanding through these techniques without having to understand the techniques themselves.

The article tips off but is spoilers-free so, enjoy reading!

From civilisations that disappeared into thin air to present day…

Koyaanisqatsi took 6 years to get made. Even though the film’s final cut was ready earlier, something quite rare happened. Philip Glass’ music, which took over three years to be composed, redefined the film’s structure. And the film was cut again to the music. Throughout the film’s production, Reggio had next to him one of the best advisors on society and technology, Langdon Winner. Should you get the time, look him up and pick any of his books from either the past or the present; you will not regret it.

Watch Koyaanisqatsi, ponder, and ask yourselves, what does your life look like? What would happen if your soul had an out-of-body experience, went on a space-time travel and came back? What would you think of your life then? What do you think of your life now? Koyaanisqatsi, as an omniscient narrator/voyeur, walks amongst us, observing our mechanised humanity and our detachment from nature, our divorce from reality, and the creation of a new, atrocious one that spirals out of control. By assessing the way we work, eat, entertain ourselves, and live it stitches together an ambient, dystopian present. Do you think we look or behave like ants? Koyaanisqatsi sees a crumbling life force in depersonalised people, and cries out for change.

Godfrey Reggio said in an interview that it is up to the viewer to figure out for themselves what Koyaanisqatsi means. It can be an environmental film, an ode to technology, a piece of shit, or just move you deeply.

Right off the bat, the man as a labour tool…

Travelling across the globe, Reggio and Glass give Powaqqatsi a ‘Third World’ multicultural flavour. They show labour and tradition, ways of working and living life in developing countries—unknown to the already ‘developed’ parts of the world. They delve into the lives of the everyday people that walk on exotic parts of this Earth, where mankind is not considered a foul species with the anti-Midas touch, destroying everything in its path. But, as it was meant to be, a mankind that is a part of nature and the Universe.

Powaqqatsi is a more optimistic, transnational, and folkloric view of the world towards the end of the 20th century. Less radical than its predecessor, it educates and juxtaposes the ‘Third World’ with the United States. As seen in Koyaanisqatsi, it presents our world not only in an unflattering light, but as hope itself. But that’s just the first half… The observations on westernisation and internationalisation march through the second half, stepping over everything mentioned above. Poverty, money, fame, pettiness, and dependence on materialism manifest, indicating that there is a world within a world, not elucidating which one is The Matrix.

Philip Glass, who accompanied Reggio this time while scouting for locations, started scoring the film during the preproduction stage. The results give the viewer heart palpitations. The montage follows Glass’ rhythms and is, once more, astounding. Religion as part of our nature, tradition, culture, customs, wealth and deprivation, all blend into an unforgettable cinematic experience for every man, woman, and non-binary person born on this planet.

Babel! Is this what we have ended up becoming?

The 20th century is now over, leading up to the millennium. Technology has had cataclysmic effects, and us, the human species has failed to adapt to the ‘modern’ world—or have we merely failed to grasp what society is? Plato mentioned that man created society as a result of not being able to cope on his own any more. (Did that ever work?) Naqoyqatsi, during its first half, ostensibly focuses on the exponential technological advancements of the 21st century, the digitalisation of money, and the idolisation of athletes and world ‘leaders’.

Naqoyqatsi, digitised itself, and relying on ‘cheap’ effects to create meaning, became a peculiar concoction that divided the audiences, and earned mixed reviews. It was accused of pseudo-intellectuality. The blame was passed straight to Reggio, not Jon Kane’s editing or Glass’ music. The film was accused of not having much to offer, not adding to the equation, of repeating (not very creatively) what had already been said and done before. Money, entertainment, art, pleasure (of many forms), family values, religion, science, technology, and political views will remain an inseparable part of our lives. How they are depicted is what makes the difference. Naqoyqatsi is a barrage of innumerable, distorted—hence the 16:9 instead of 4:3 ratio—and edited (subliminal) images, much like the information we receive everyday with just a click. It is indistinguishable and unprocessable. It wreaks havoc in our minds. It begets violence.

Naqoyqatsi offers a kaleidoscopic view of our world. The oxymoronic scheme of technology advancing us while setting us back, the distorted sense of achievement, the chaotic structure of the modern world, the justification of violence and war—we embrace this and welcome it into our lives. Cyber realities distance us from nature, athletes become the products of brands, and technology creates wants to replace our needs. It makes me want to read Brave New World again.

The Qatsi trilogy is a cinematic statement about civilisation, technology, nature, and the relationship among the three. It is a trilogy left behind in the shadow cast by blockbusters, forgotten by time, buried in oblivion. Does it matter that MGM is behind it? Does it matter that Warner Bros is behind The Matrix (1999) and V for Vendetta (2005), films that are anarchic? Well, Miramax is also behind The Qatsi Trilogy—go figure!

After watching the trilogy a couple of times, I have been grappling with this montage of thoughts. I was thinking to myself that I should acknowledge the swamp surrounding me but to focus on and be exemplified by the fragrant water lilies standing out. I was also thinking that if I can’t do any good to someone, at least I will do my best not to hurt them. Then I was wondering, where do I stand in this world? How can I better it before I go?

Watch and listen to the Qatsi narrating a story, but also appealing to you to pay attention to what once was and what it is now.

Thank you for reading!

Konstantinos got into TV and Film production immediately after school. He has been studying and working in this field ever since. In 2011, he won the Nostimon Imar Award (Best Greek Director Abroad) for his short film Ithacathat he wrote, edited and directed. The following year, he donated his documentary Asperger Syndrome: Myths & Reality to the National Autistic Society in the U.K. Konstantinos lives and works in the U.K. as a freelance Video Editor and Camera Operator for corporate videos, fashion shows, and documentaries. He is currently pursuing a PhD in Film at the University of Nottingham and reviewing films on his own blog.