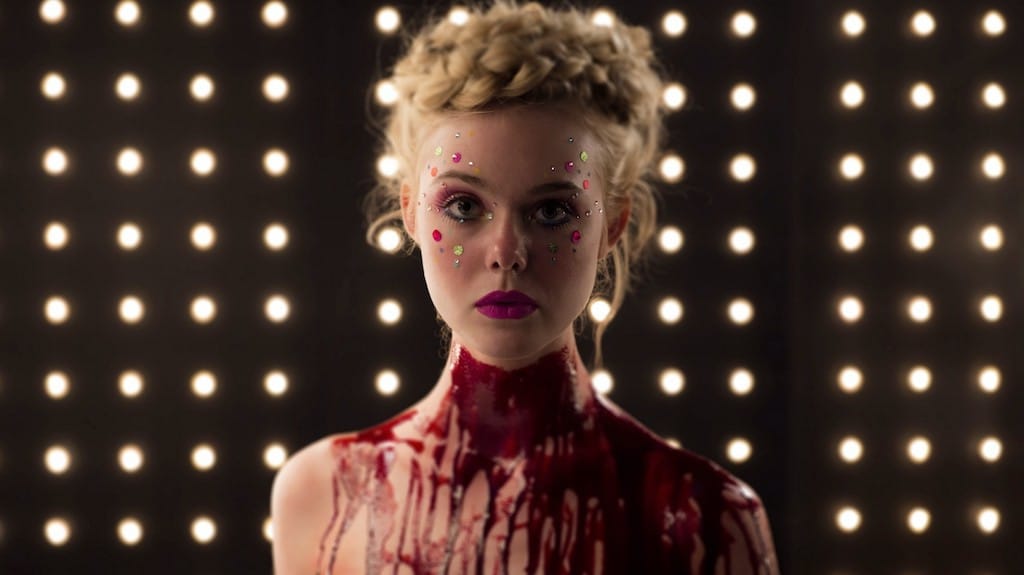 Silver screen horror—much like the fickle and fleeting world of runway modeling portrayed in Nicolas Winding Refn’s 2016 film The Neon Demon—is all about chasing the latest trend. In the early 2000s, for instance, the sleeper success of torture porn grime like Saw and Hostel spearheaded the wave of Splat Pack films that followed. In 2007, the high profit margin of the low budget Paranormal Activity single-handedly ignited a found-footage frenzy. And throughout the 2010s, a new brand of horror has emerged that—while not exactly busting any proverbial blocks the way a tried-and-true slasher flick might have done in the 80s—has certainly captured the imaginations of cinephiles and casual VOD taste testers alike.

This strange new subgenre—derisively but aptly described by American Psycho author Bret Easton Ellis[1] as “indie arthouse horror”—is characterized by symbolically-driven narratives and stylistically self-aware auteur filmmaking. It trades the exploitation violence and focus-tested jump-scares of old for an aesthetic-over-everything approach epitomized by visually self-aware films like The Babadook and The Witch.

Take a film like 2014’s hot topic It Follows, in which a group of teenagers are terrorized by an unseen killer as punishment for their promiscuity—sound familiar? Had this simple elevator pitch been realized even a decade prior, we would have been treated with either a boilerplate Jason knockoff or a ham-handed attempt at genre deconstruction that Wes Craven had already smartly achieved with 1999’s self-referential Scream. Instead, in the modern era, the earnest schlock and wry satire of old have been replaced with something else entirely. The once lowbrow direct-to-video connotations of onscreen horror have been gently set aside by young auteur filmmakers; they have chosen to use the ironclad tropes established by a century’s worth of horror backlog to the play with aesthetics and provide an experience that, if not scary, then at the very least visually and thematically of interest. While the patient zero for indie arthouse horror may very well be Lars Von Trier’s 2011 symbols-and-scares film Antichrist, the darkroom cinematography of the aforementioned It Follows and the slow-burn, drink-it-all-in approach to 2014’s Goodnight Mommy make the trend of aesthetics-over-everything in this newborn subgenre crystal clear.

Which brings us to The Neon Demon, a film that takes the aesthetic earnestness of indie arthouse horror and pushes it so far in the direction of visual decadence over a traditional scare-them-at-any-cost approach that—at the risk of making a base semantic argument—its classification as horror at all becomes borderline dubious.

Refn is a director famous for his too-cool-for-the-room visuals—whether it be the climate-controlled precision of his 2011 hit Drive or the anachronistic sonics of the semi-biopic Bronson three years prior. From the elevator pitch alone, The Neon Demon seems to be the kind of film Refn was born to make. Up-and-coming Hollywood darling Elle Fanning plays the doe-eyed fledgling model Jesse—constantly bewildered by the dark underbelly of the ostensibly glamorous modeling world she finds herself in. Such a concept is perfectly designed to accommodate Refn’s penchant for Kubrickian symmetry and panache for color-corrected beauty. Just like the beauty-obsessed models and hungry-eyed runway directors that populate the plastic-perfect world of The Neon Demon, Refn ironically treats every scene, every frame, with the same discriminating eye for excellence at any cost that the film itself satirizes.

The Neon Demon is a film about artifice. The title alone suggests as much, but it’s the encompassing combination of nightclub lighting and synthesizer soundtrack that drive the point home on a purely experiential level. The score alternates between a rave DJ’s tracklist and the spooky etherealism of reverberating chimes and auto-tuned bells that make every onscreen occurrence feel like a dark tinseltown fairy tale, with Fanning’s Jesse as the Disney princess surrounded by fire-breathing runway dragons and the big bad wolves of the casting couch.

Falsehoods abound. Even the opening scene—which portrays a dolled-up Jesse as a still corpse for her (boy)friend Dean’s pretentious attempts at high art—raises the question of where does the art end and reality begin. Indeed, in the context of the it’s-real-to-them world the characters inhabit, Dean’s aforementioned attempt at profundity might be seen as pretentious drivel, but when viewed in the larger meta-context of the self-aware viewer, we realize that such an otherwise mundane scene holds deeper implications to Jesse’s ultimate fate.

“Honey, people believe what they’re told,” says the casting agent who gives Jesse her first big break. And while the film goes out of its way to tell us plenty of things we already knew or at least suspected, like the life-and-death desperation of the beauty industry, it also throws us some curveballs that could only really be appreciated by an audience well-versed in Hollywood shorthand. The most notable of these twists is the semiotic coup of having the oft-typecast Hollywood heartthrob Keanu Reeves play far against type as the sleazy, morally-repugnant landlord of the seedy motel that the (presumably) runaway Jesse calls home. It’s a bit part that could have easily gone to an eccentric character actor or a theater graduate with an off-putting appearance, but by casting everybody’s favorite action star in such a dubious role, Refn tells the audience in no uncertain terms that no one is to be trusted in his big screen world.

The thematic idea of modeling-as-a-death-sentence—again foreshadowed in that opening scene—permeates the film, whether it’s the constant allusions to the starvation diets the models inflict on themselves to stay thin, or the self-aware knowledge that once they reach a certain age, these icons of beauty become worthless in the eyes of the industry they’ve given everything to. Indeed, what are these wannabe fashionistas if not the walking dead, starving themselves until they’re nothing but skin and bones—husks in the heart of American excess, injecting their lips with artifice, with the often-referenced but never-seen plastic surgeon Dr. Andrews acting as modern day necromancer to keep his funeral-ready corpses animated.

Jesse herself, in a moment of pride in her own natural looks, puts it best:

“Women would kill to look like this. They carve and stuff and inject themselves. They starve to death, hoping, praying that one day they’ll look like a second-rate version of me.”

These purposely-unsubtle notions become downright literal in the form of an extended sequence of onscreen necrophilia that—while giving The Neon Demon its horror bona fides with an appropriately nauseating bit of shock value—feels somewhat inevitable considering the insinuations of the film’s symbolic subtext.

A surface viewing of events might garner the conclusion that it is only after the erstwhile innocent Jesse symbolically sells her soul to the industry—complete with the Illuminati imagery of backlit triangles and a direct shift to a demonic-red color palette, no less—that her troubles truly begin. In the early days of her newfound career, Jesse merely flirts with her profession’s underlying darkness—including a memorable close call with a glowering Desmond Harrington as a photographer with suspect motives—and it’s the jaded derision of her peers that give her a glimpse into what she could become a few years into the biz. But upon deeper reflection, and despite her naivety, it becomes clear from the very beginning that Jesse is self-aware of her beauty, as both a fact of life and an asset to be used to her advantage.

“I can’t sing. I can’t dance. I can’t write. No real talent. But I’m pretty, and I can make money off pretty.”

It’s an interesting bit of real world cynicism and cold hard truth from an otherwise naive country girl in the big city, and hints at the kind of troubled life she must have had prior to the events of the film.

Despite The Neon Demon’s ethereal score and symbolic art-installation glamour, it’s only in the film’s final few minutes that things take a turn for the supernatural. Jesse, having raised the ire of the various women she’s interacted with throughout the film’s plot, finally becomes the victim of their vengeful wrath by way of a brutal murder sequence. This scene implies an off-screen venture into cannibalism by the scorned models, hell-bent on obtaining her youth and beauty by any means necessary. But was Jesse’s murder merely petty revenge or a genuine virgin sacrifice in the style of Elizabeth Bathory? The perpetrator of the previously referenced necrophilia engages in a moonlight ritual that certainly hints at a larger occult conspiracy, but perhaps this is just some basic (if obscene) visual metaphor. And yet, even if Jesse’s murder really is just the product of base jealousy and a misplaced desire for revenge, it’s all so dolled up—pristine and artistic—and in doing so, the film makes you wonder what really happened behind the veneer, the façade.

Is The Neon Demon the epitome of indie arthouse horror’s mission statement of symbolism over scares? Of aesthetics at any cost?

Its title alone provides a rather fitting description of the subgenre’s artistic intentions.

To steal your soul. And look good while doing so.

Michael Derrick is a comic book creator and creator of the satirical webcomic Millenials. His blog Cauldron Comics features comics, reviews, film analysis, personal essays, behind the scenes work, and more. He can be found on Twitter as well, with less snark and sarcasm than you might expect.

Amandine is a seventeen year old self-taught artist from France. She enjoys drawing, painting, and exploring new artistic techniques. She thinks art is a universal language that allows you to express what you cannot say in words. You can follow her art journey on Instagram.