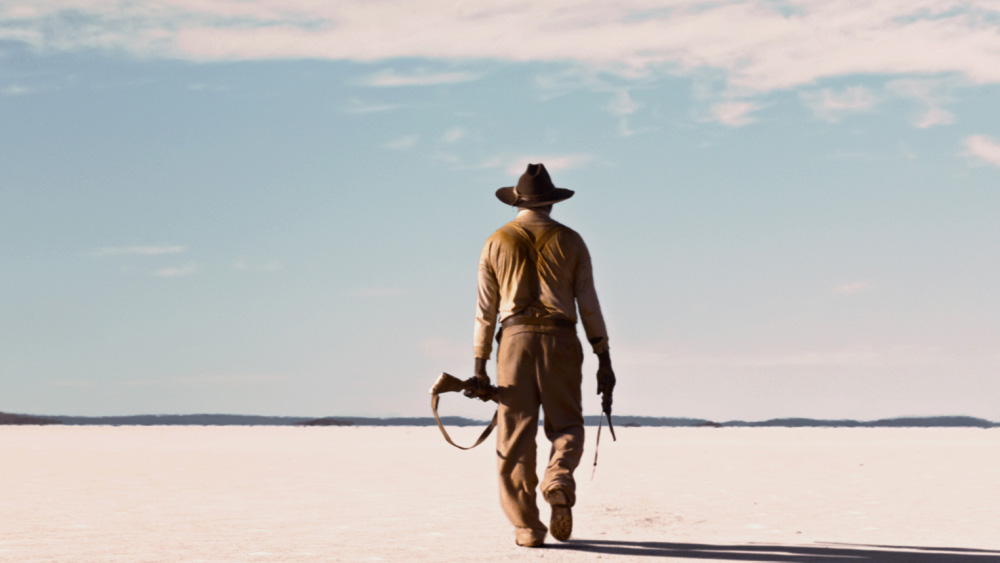 The Preacher. The Outlaw. The Sheriff. The Circuit Judge. The archetypal characters of the Western genre are present and accounted for in Warwick Thornton’s internationally award-winning feature film, Sweet Country. However, all is perhaps not what it seems. The outlaw is Aboriginal stockman Sam on the run for killing a white station owner. The setting is 1920s frontier country in Australia’s Northern Territory. And the events are inspired by a shocking true story.

The period drama is Thornton’s second narrative feature following the success of his Camera d’Or winning film Samson and Delilah released in 2009. The creative team behind the film includes talented writers David Tranter and Steven MacGregor, and Australian production company Bunya Productions. Thornton, who originally trained as a cinematographer for the Alice Springs based Central Australian Aboriginal Media Association, was both director and DOP on the film along with his son, Dylan River. Many of the actors in the film are local Aboriginal people from the outback Alice Springs region, including Warlpiri man Hamilton Morris who plays main character, Sam Kelly, Eastern Arrernte woman Natassia Gorey-Furber (Lizzie, Sam’s wife), and Eastern Arrernte man Gibson John (Archie, a local tracker). Other main roles in the film are played by well-known Australian actors, Bryan Brown (Sergeant Fletcher) and Matt Day (Judge Taylor) and by New Zealand actor Sam Neill (Fred Smith, a local Christian landowner).

The story centres on an incident triggered by the arrival of a disturbed World War I veteran, Harry March (Ewen Leslie) to a nearby station. Harry appears on the doorstep of local landowner Fred Smith asking for a loan of Aboriginal workers. Sam, the head Aboriginal stockman, his wife Lizzie, niece Lucy (Shanika Cole) and young boy Philomac (played by Eastern Arrernte twins Tremayne Doolan/Trevon Doolan) are sent to Harry’s station. The young boy and the women are left at the mercy of the unpredictable and violent Harry March. Lizzie sends Lucy away just in time, but is herself raped by Harry, unbeknownst to Sam, in a disturbing scene. Philomac is brutally chained and left overnight, but manages to escape, running to the neighbouring station. He hides there, while Sam and Lizzie return to the station. Harry March, having pursued Philomac, demands the boy’s return from Sam. Believing Sam and Lizzie are hiding the boy in the homestead, Harry fires shots in an increasingly erratic manner. Sam, fearing for his own and Lizzie’s life, shoots Harry dead.

What unfolds is a result of the conflict between natural justice and a racist culture. Sam and Lizzie understand all too well the prejudice and hate that will pursue them, having killed a white man. They choose to flee, heading into country that is not their own and therefore foreign, harsh and threatening. The local sergeant forms a posse, and led by Aboriginal tracker, Archie, they pursue Sam and Lizzie. It is only after discovering Lizzie’s pregnancy that Sam gives himself up after a futile hunt. Sam is brought before the newly arrived Judge Taylor in his makeshift outdoor courtroom in the middle of town. Whose justice will prevail?

The synopsis belies the subtlety of the film and the themes tackled within the overarching plot. The filmmakers deliberately chose the Western genre to drive the story as a means of connecting with a contemporary non-Aboriginal audience.

As Warwick Thornton states in the film’s production notes: “My aim has been to use the accessibility of the western genre for audiences to enter the story and be drawn into this world and so experience the issues faced by an occupied people. This immersive approach is designed to break down the cultural boundaries between us and bring us together.”

Indeed, genre rules the plot. Sam as ‘The Outlaw’ embarks upon a classic hero’s journey – being thrust into an unfamiliar world of adventure, only to return to meet head on the danger he has left behind. Sergeant Fletcher ‘The Sheriff’ is found to be morally dubious in the face of Sam’s ethical behaviour. Judge Taylor performs his duty to the plot as ‘The Circuit Judge’ and Fred, as ‘The Preacher’, is the voice of decency and reason in the town, reinforced by the final words of the screenplay.

Within the bounds of these conventions, Sweet Country mythologises an Aboriginal man as hero, reveals the arbitrary, shocking, racist violence of the Australian frontier barely a couple of generations ago, and delivers a strong political message for a contemporary audience about the continuing effect of this past on today’s Aboriginal population. The boy, Philomac, acts as a witness and almost a prophet figure foreshadowing the future consequences of violence and separation from cultural connection and heritage. The lack of a classic music score, in fact the film is mostly characterised by the silence of the remote landscape, and the slow pace of supposedly a chase film, make the experience of watching Sweet Country gripping and unrelenting. The violence of the rape in particular is chilling, with the audience left in a pitch black darkness during the scene. The violence is graphic, and the use of flash-forwards propels the audience to the end of the sequence in a disquieting manner. The look of the film deliberately creates a difference between the native landscape and the human beings and man-made structures within it – the filmmakers have used different grains in the film so that the landscape stands out as a character by itself. The scenes between Sam and his wife, Lizzie, too defy filmic convention in that looks and gestures are often used in place of dialogue. This is authentic to present-day methods of communication used by the Aboriginal actors and their community members.

Australia does not have a strong history of locally-made Hollywood style westerns, rather the early Australian film industry was dominated by what are more accurately described as bushranging films. There is an intriguing (and esoteric) reference in Sweet Country to one of the earliest bushranging films made in Australia based on notorious real-life bushranger, Ned Kelly, The Story of the Kelly Gang (1906). The silent film can be seen playing in the background in the town when Sergeant Fletcher returns humiliated and empty-handed from his pursuit of Sam. Similar to the Western genre in the use of archetypal characters, however pitched to audiences as uniquely Australian, these bushranging films mythologised and idolised the bushranger heroes while denigrating the police force. In a similar way to Sweet Country, these early bushranger films relied on stories and media reportage of real events and were often inspired by historical figures.

The screenplay of Sweet Country was drawn from stories told by the grandfather of writer David Tranter about a real-life Aboriginal man, Willaberta Jack, who was arrested and tried for the murder of a white man in Central Australia in the 1920s. He was found innocent on the grounds of self-defense by the court of the day. However, he was later the subject of a revenge killing. David Tranter captured the story in a short documentary, Willaberta Jack, released by Ronin Films in 2007. The story is powerfully told by two Aboriginal men, Donald Thompson and Alec Peterson, in their language, and through reenactment and use of archival photos and letters. Harry Henty was an actual World War I veteran settler, known in the area for his cruelty. He used to punish and chain young Philomac from Elkedra station, who did indeed escape his brutality. Willaberta Jack was found by a court to have been threatened by Harry Henty, and the killing of Henty was determined to be self-defense.

There are consequences and story choices to be made when using archetype and the Western genre as a frame for a film. One consequence may be the filmmaker’s choice of ending for Sweet Country. The manner of the murder of the real Willaberta Jack and Sam’s ultimate fate in Sweet Country are not the same. The actual events of Willaberta’s revenge killing were perhaps too cowardly and too shocking for a mainstream contemporary audience used to a Western genre finale. Perhaps one other consequence for story choice within the Western genre is the role and depiction of women. Women characters in Hollywood westerns are typically not just archetypes but gender stereotypes, commonly the victims of sexual violence and without true individual agency. The complexity of gender relations is lost as is the ability of a woman to drive the storyline without a man as hero. Has this occurred in Sweet Country? The answer to this is complex, given the Australian historical context of the systematic abuse and silencing of Aboriginal women. Sweet Country is a man’s story and based on a real man’s life events. And yet there is one undeniably powerful scene where a group of senior Aboriginal women silently and accusingly oversee the makeshift courtroom trial, watching on as men decide the fate of men with women on the sidelines.

Sweet Country is a remarkable film. The filmmakers have skillfully and creatively delivered a story to the screen that connects with Australian and international audiences in a powerful way. The film frames the story using the Western genre and at the same time subverts the genre, bringing an authentic storytelling experience to a new audience. Sweet Country may well pave the way for a number of films depicting heroic Aboriginal ‘outlaw’ stories inspired by real events. It is hoped that this story will spur its audience to seek out more stories about frontier conflict, the real-life stories of Aboriginal men and women in Australia and to face its harsh realities.

Sara Cousins is a Melbourne-based creative producer specialising in digital education. She has been a producer for global digital agencies and national cultural organisations such as the Australian Centre for the Moving Image, the Australian Broadcasting Corporation and the National Film and Sound Archive.  She is a freelance writer with a particular interest in storytelling, history and Australian film.  More of her writing can be found at msdigifly.com. Twitter: @msdigifly