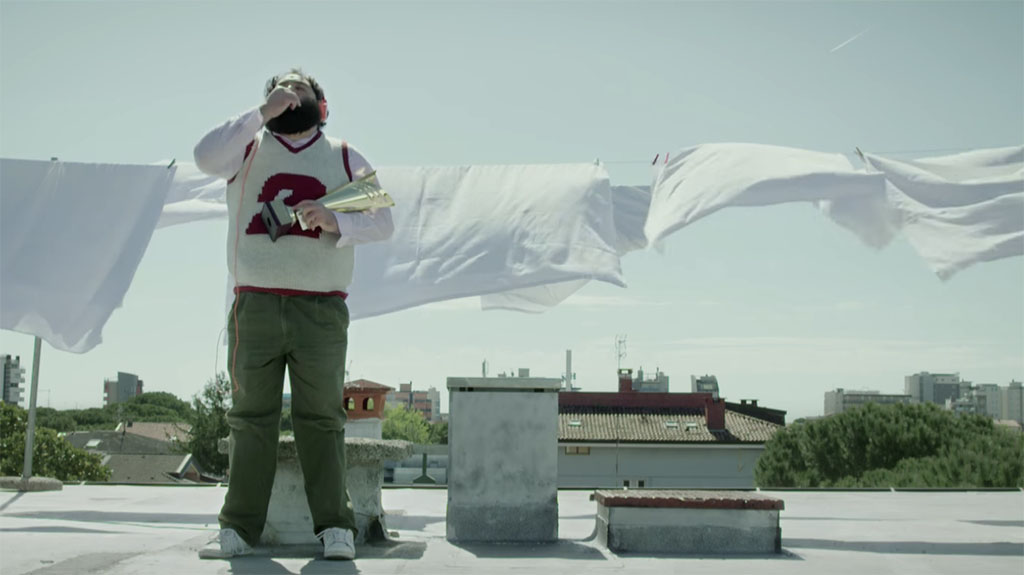 I watched Easy [Un viaggio facile facile], written and directed by Italian filmmaker Andrea Magnani, as part of the Italian Film Festival USA 2018. The screening was followed by a short Q&A session with the director. I caught the film in Pittsburgh, in a beautiful space modelled after a fifteenth century Roman villa.

Easy, or Isidoro, is a fat man who lives with his mother. He eats more chips than he should, his bed is shaped like a red car, he doesn’t talk much, he plays video games, he is depressed. Easy’s brother Filo has had more tangible success in life, overseeing construction projects. Filo approaches Easy with an unusual request. One of his workers, Taras (a man from Ukraine), has fallen off the scaffolding and died. Would Easy drive to Ukraine to hand over this body? Easy wants to know why. Filo admits he hasn’t been very scrupulous with maintaining safety standards at the site, and he will be in trouble if the authorities find out someone has died.

Easy’s brother thinks he would be the perfect candidate to do this. You see, Easy used to race. A skilled driver, winning the Italian Go-Karting championship at fourteen, and the European Championship the following year. He had Formula 1 looking at him. But he hasn’t driven in fourteen years. Not since he got fat, we are initially told, which would explain why his family insists he stays on his diet.

Easy agrees to make this trip, or rather, he is talked into making this trip. He is sent off with an apple, low calorie energy bars, a winter coat, and Hungarian money. His first stop involves stocking up on high calorie foods. We are taken along as Easy goes on this strange cross-country drive, through mountains and vast barren stretches of land, meeting people who don’t speak Italian. There is a bit of comic relief, arising from misunderstandings and miscommunication, there is some physical and visual comedy as well. Easy escapes from the police, steals from a church, shares a cigarette with a priest who wants to become a singer, drives an excavator around a race track, and drinks strong Ukrainian liquor.

Easy later tells us the real reason he stopped racing, in a moving monologue. The director said he wanted to show a man who was alive but not really living, a man dead inside, and how that man was dragging across Europe not just a coffin, but the weight of his own existence. The movie leaves us with a question, and the idea that Easy may be somewhat ready to live his life.

Easy is a movie eight years in the making. Shooting was supposed to commence in 2014, but was indefinitely postponed because of the war in Ukraine. The Ukrainian government had put film financing on hold, and it wasn’t until two years later that a telephone call came and got things moving again. There was one condition though – the team would have to start shooting immediately. It was the middle of winter, and Magnani’s script was about a road trip in summertime. He changed the script a little to accommodate the weather conditions – but Nocella wasn’t too pleased that the revised script still had him jumping into a cold river!

Nicola Nocella plays Easy like a gentle giant, plodding along in a state of semi-consciousness. The director mentioned that Nocella is in fact a very joyful person in real life, full of the exuberance that his on-screen character was missing. Magnani said that he liked the naïveté visible on the actor’s face, and after watching him in The Youngest Son, he knew he’d discovered his Easy. He found an email address listed on the internet and sent across a script. Nocella apparently responded within the hour, eager to start.

What is Easy going to do next, someone in the audience wanted to know, six minutes into the interaction with the director. I would like to think the movie ends on a hopeful note, and I would like to assume Easy rebuilds his life, because Magnani made it clear that a sequel isn’t happening. Someone else wanted to know how the scene where Easy steals from a church was received in Italy. He said the reception wasn’t so much the problem, it was the filming that had him running around. Many priests read the script and refused permission – not only does Easy steal, he also eats stuffs himself with the host. Finally, Magnani found a priest who wasn’t interested in reading the script, and who was kept away on the day of the shoot with the false claim that Nocella liked to have privacy during the shoot.

Another audience member who happened to be from Ukraine asked the director how he decided on Ukraine. Magnani explained that his conditions were that Easy would have to go to a country whose language he didn’t speak, where he would feel helpless, and “lose all reference points.” In fact, the first draft of the script had Easy traveling to the Balkans, to Serbia and Bosnia. It so happened that producers from Ukraine fell in love with the script, and Magnani realized that their country’s unique landscape served as an effective representation of Easy’s loneliness.

I asked the director to elaborate on the point he had attempted to make, about migrant labour in Italy. He said there are many who come to Italy to work, from countries in Asia, Africa, Eastern Europe. “They are taken for granted,” he said. By having Easy take Taras back in person, Magnani was hoping to give back some of the dignity Taras and others like him have lost. He also added that since Easy is a filmed from an Italian’s perspective, he wanted to show Italians how the Others live, and what they left behind.

Easy is the first Italian movie I’ve watched, the first film I watched by myself in a theatre, the first time I asked a director a question about his movie. It felt oddly fitting that the movie should be about a man who goes on a journey by himself, doing things he’s not familiar with, in places he’s never seen before.