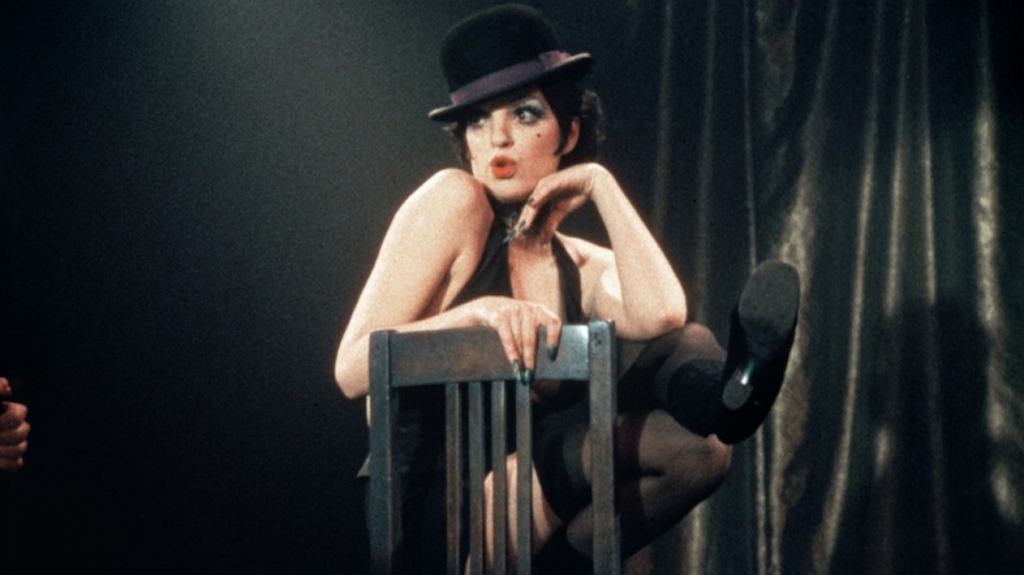 Reconstructing the cultural atmosphere of Weimar Republic—the name given to the period of German history between the end of World War I, in 1919, and the rise of Nazism, in 1933—is an imaginative exercise made easy only by the registers of authors such as Christopher Isherwood. His book The Berlin Stories (originally published in 1945)—a collection of semi-autobiographical narratives in which he talks about his period living in Weimar Germany—was the basis for the realization of one of the most acclaimed and successful Hollywood movies of all time: Cabaret (1972). Directed by Bob Fosse, this film was responsible for immortalizing Liza Minnelli as an icon of worldwide cinema.

A celebrated American dancer, Fosse filled his cinema with a jazz flourish. In Cabaret, set in Berlin in the early 1930s, Liza is Sally Bowles, an ingenuous, clumsy femme fatale who dreams of becoming a movie star. While pursuing this dream, she earns a living by singing at the famous Kit Kat Club, and involving herself in numerous love affairs, all of which failed.

One time, she meets Brian Roberts (Michael York), a young English teacher less interested in seducing women than in preparing for his future academic qualifications. They begin a torrid relationship, which is interrupted by the presence of Sally’s new lover, millionaire Maxmillian von Heune (Helmut Griem).

Cabaret is different from the old Hollywood musicals, in which narrative is driven by allegories and sequences of sung dialogues. In this film, the musical numbers occur only at the Kit Kat Club, as part of the fictional narrative. Sally Bowles’s adventures symbolize the euphoria that marks the years before Hitler’s ascension to power. The flamboyant Master of Ceremony (in an unforgettable performance by Joel Grey) dictates the tone of this euphoria, which intends to cover up the growing state of threat that ravages German streets. The film offers us a singular depiction of Weimar era behaviour, highlighting some controversial themes such as abortion, homosexuality, and women’s condition.

Berlin culture in the interwar period is characterized by a hedonism in the shadow of a brute political force. In his book The World in the Evening (1954), Isherwood describes the mood of sexual freedom in Weimar Republic:

“In Berlin, it wasn’t enough merely to want sex. You were expected to specialize, to ask for a teenage virgin, a 70-year old woman, a girl with a whip and high boots, a transvestite, a policeman, a pageboy or a dog. And in case you couldn’t make up your mind what you wanted, there was a Museum of Sexual Science, where you could study photographs of hermaphrodites (…), torture instruments, fantasy drawings by nymphomaniacs, female underwear worn by officers beneath their uniform and many other marvels.”[1]

Artistic avant-garde types absorbed the influence of that new freedom. Sally Bowles is the representation of German culture’s “divine decadence.” With her long, exaggerated eyelashes, short, black hair, androgynous body and risqué costumes à la Lola-Lola (Marlene Dietrich’s character in The Blue Angel), she is the modern Berlin woman, free to experiment. Her story, however, exposes the farce of women’s sexual freedom, which only exists until where male domination allows. At the Kit Kat Club, Sally seeks refuge from the duties she has been assigned as a woman—mother, wife—and goes against the submissive conduct and morality expected of her. At the cabaret, Sally imagines she is free, but she is an object that satisfies the wishes of men. Her freedom starts and ends there. At the cabaret, a space created by and for men; at the cabaret, where “life is beautiful.”[2]

From Van Druten’s play (I Am a Camera), a “hot” Broadway musical was made in 1966 starring Judi Dench. “The real story,”, said Liza Minnelli in an interview to Huffington Post, “the man [Brian] was gay and that was the problem. They tried and tried — but that’s the turning point in the film. The era and how fascinated he is with that. Sally, she’s so bizarre, because she wants to be so special. Not a star, because a star would take her away from being special. She could go and sing in a better club, she had the voice, but no, no, she wanted to be there because that was where everything was happening.”[3]

Cabaret won numerous awards—the Golden Globe for Best Comedy/Musical Film, and eight Oscars, including Best Director for Bob Fosse, Best Supporting Actor for Joel Grey and Best Actress for Liza Minnelli, who had already been nominated three years before, in 1969, for her performance in Alan J. Pakula’s The Sterile Cuckoo.

Born in England in 1904, Christopher Isherwood dreamt of earning a living by writing. He discarded his “English persona” in the early 1930s, attracted by Berlin’s bohemia and cultural effervescence. It was there he found rich material for his novels.

In an article for Morning Star newspaper, journalist Peter Frost remembered his time at the Young Communist League, which had as a member “an elegant and fascinating women comrade” named Jean Ross. “When the film Cabaret was released in 1972 I first heard a strange and at the time, almost unbelievable story,” he writes. “That same Jean Ross, it was said, was the real Sally Bowles, chief character in the film played by Liza Minnelli. Ross died in 1973 and I was never able to track down the origins or indeed the veracity of the stories. Now, 40 years after her death, I think I’ve found the truth. It is certainly an amazing tale and one worth telling.”[4]

Born in Alexandria, Egypt, in 1911, Ross was the child of a wealthy cotton businessman, the eldest of four. As a teenager, she moved to England. A brilliant student, often irreverent, she feigned a pregnancy so that she could be expelled from school. Her parents sent her to Switzerland to complete her studies. She stayed there, until she enrolled herself at the Royal Academy of Dramatic Art. At nineteen, distinguished by her fluency in different languages, she got a small part in When Sailors Leave Home (1930), a low-budget British comedy film in which she played a harem girl. She came to know about job vacancies for actresses in Germany and moved to Berlin, living a double life as a model during the day, and cabaret singer through the night.

This nightlife introduced her to Christopher Isherwood, and they became close friends. Assumed homosexual, Isherwood put himself as an assiduous observer of Berlin lifestyle—“a camera with its shutter open, quite passive, recording, not thinking.”[5] In The Berlin Stories, Isherwood describes Ross as a rebel, a dreamer who had no artistic talent at all:

“She had a surprisingly deep, husky voice. She sang badly, without any expression, her hands hanging down at her sides – yet her performance was, in its own way, effective because of her startling appearance and her air of not caring a curse of what people thought of her…”

The author also claimed in an interview that the real Sally Bowles was smarter and more fascinating than her representations in cinema, theater and even his own book. He says:

“She was adorable, marvelous. She was very lively and way more amusing than the character in the book. She had a kind of atmosphere of kidding the whole thing. She was almost making fun of having a deep, husky voice. And of course, that was very much in vogue at the time—it was the Dietrich period, and the idea of singing like that was a kind of impersonation.”

Among the many men—famous and not famous—with whom she has been romantically involved, was the then musician Götz von Eick, whose baby she eventually aborted. Later, in Hollywood, Götz would come to be well regarded as the actor Peter van Eyck.

It is also believed that the song These Foolish Things (Remind Me of You), made popular in the voices of Billie Holiday, Nat King Cole, Sam Cooke, Sarah Vaughan, Ella Fitzgerald, and others, was actually a tribute by composer Eric Maschwitz to his lover Ross.

It is believed that Jean Ross left Germany and moved to England soon after the rise of Hitler. She became a member of the Communist Party, and was an active militant until her death in 1973. She worked as a reporter and film critic for the Daily Worker, under the pseudonym Peter Porcupine.

The Berlin Stories, elected by Time magazine as one of the 100 best English language-novels of the 20th century, is Isherwood’s farewell to the Berlin of romantic dreams, to the bohemian idyll that later gave way to repression and darkness, which even those who lived at the time have a hard time coming to terms with.

Rafaella Britto is a Brazilian writer and film critic based in São Paulo. She is the co-founder and editor of Cine Suffragette, a multilingual publication dedicated to women in film. She is also a teacher and a graduate student of languages. Her passions are literature, cinema, fashion history, old jazz, and rock n’ roll music.