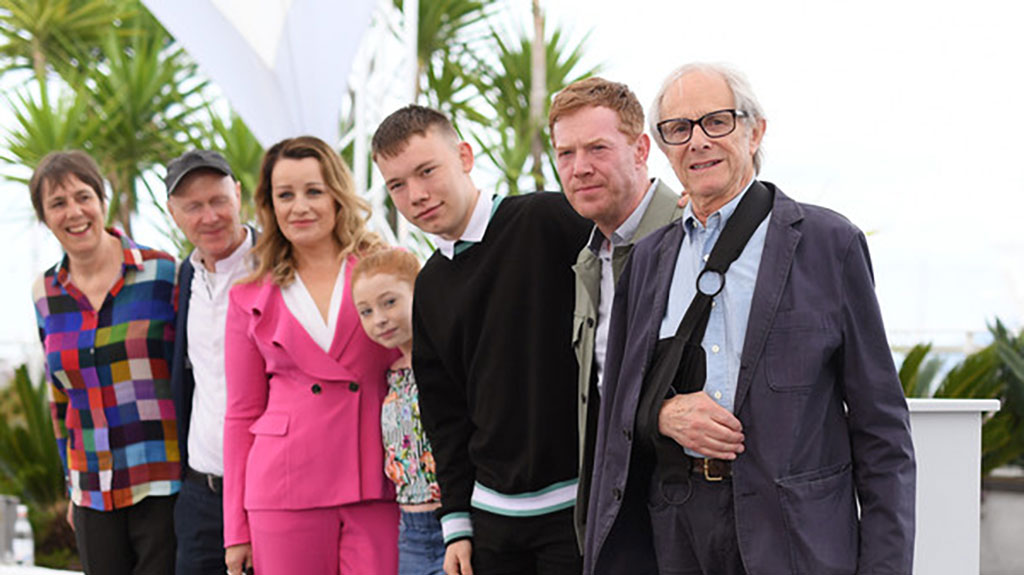 Ken Loach is back—despite what you might have heard previously—and his latest film premiered to glowing reviews at Cannes back in May. While Sorry We Missed You didn’t receive critical acclaim the way the Loach’s previous film I, Daniel Blake (2016) did, it was heralded as an another success from the veteran filmmaker.

During the 72nd Festival de Cannes, Ken Loach along with his frequent contributors—writer Paul Laverty and producer Rebecca O’Brien—met with various members of the press and festival attendees in the UK’s tent on the Pavilion to talk about his new film, the gig economy, and Netflix.

The three panelists—who form a “strange organic body” according to O’Brien—have worked on sixteen films together since 2000’s Bread and Roses, to the Palme D’or winning The Wind that Shakes the Barley (2006) and I, Daniel Blake which won in 2016, making Loach part of an elite group of filmmakers who have won the prestigious award twice.

Loach’s new offering is focused on a working-class family in Newcastle, who are struggling under the pressures of their insecure jobs in the care sector and, in the father Ricky’s case, driving vans for an online delivery service. It is clear that this film shares more than a location in common with I, Daniel Blake, and this is touched upon by the trio in the opening minutes of the discussion; as during their conversations surrounding the previous film, it “became apparent” to Loach ‘that poverty [was no longer] restricted to those who weren’t working.”

Laverty pointed out that Sorry We Missed You was as much a companion piece to I, Daniel Blake as it was a commentary on “the breakneck speed at which work is changing our lives.” Both Abbie and Rickie in the film work in precarious industries in the new gig economy, where a job is not secured by a full-time contract, but instead by ‘zero hours contracts’ which encourage flexibility but are based on demanding workloads and very little pay, breaks or protections for workers.

The talk quickly turned to a discussion surrounding the film industry, its reliance on young people desperate to gain experience, and how this is exploited by the industry’s own version of the gig economy. While there are unions in the film industry, much of the precious experience that needs to be gained is done by means of connections, internships, and minimum wage, short-term contracts that do not provide a stable source of income for those just starting out. As someone who has ambitions to join this industry—on the criticism side on things—this rings particularly true for me. Unpaid internships dominate the creative industries, which only serves to restrict access to major sections of the population. For those of us who are either working full time and writing on the side, or do not have parents to support us as we look for (mostly unpaid) opportunities in London, this is simply not feasible.

It was interesting to hear these issues being spoken about and condemned by a major figure within British and European cinema, though this isn’t entirely surprising considering Loach’s left-wing politics. His previous films have often depicted the importance and power of workers’ unions.

The Festival de Cannes is notorious for its dislike of Netflix and similar streaming services, with productions by such entertainment companies not considered in competition screenings. unable to screen in competition. So, it was no surprise when an audience member mentioned Netflix is fast becoming the film-going experience of choice for the working class, as it offers millions of films for just £7.99 a month.

Loach, who prior to this had stated that “cinema should remain in the cinema,” to rapturous applause from the audience, replied that although films will undoubtedly end up on a streaming service, the collective experience of seeing films is ultimately the important aspect. While there is nothing like seeing a film in a dark room with strangers, bonding over the anticipation of seeing something completely unknown, there is a particular short-sightedness to this answer. Netflix is giving opportunities to writers and directors who have traditionally been denied access to the multiplexes: we now see diverse and interesting rom-coms like Someone Great (2019), Always Be My Maybe (2019), written and directed by women and people of colour. As Cuarón said following criticism of his decision to release Roma (2018) on Netflix, “How many theaters did you think that a Mexican film in black and white, in Spanish and Mixteco, that is a drama without stars—how big did you think it would be as a conventional theatrical release?”[1] Not to mention that it provides people with the ability to watch art-house films and smaller releases that aren’t guaranteed a release in your local theatre. This matters when you talk about communities and their access to the kind of independent cinemas that are mostly congregated in major cities.

The culture of ‘life on demand’ is firmly ingrained into our society now, from film and TV to our food and shopping. It only continues to develop with new technology developed by companies such as Amazon. It is important to remember, however, that development under capitalism always comes at a cost–something that we can longer choose to ignore—and Sorry We Missed You explores that cost in a microcosm.

Loach returns with another timely film on Britain and the devastating effect the austerity implemented by the Tory government has had, and will no doubt continue to have, on the most vulnerable in our society. It is a continuing reminder of the things we still need to fight for.

In the cover image: [from left to right] Rebecca O’Brien, Paul Laverty, Debbie Honeywood, Katie Proctor, Rhys Stone, Kris Hitchen and Ken Loach at the photocall for Sorry We Missed You

All pictures belong to the author. They may not be reproduced without permission.