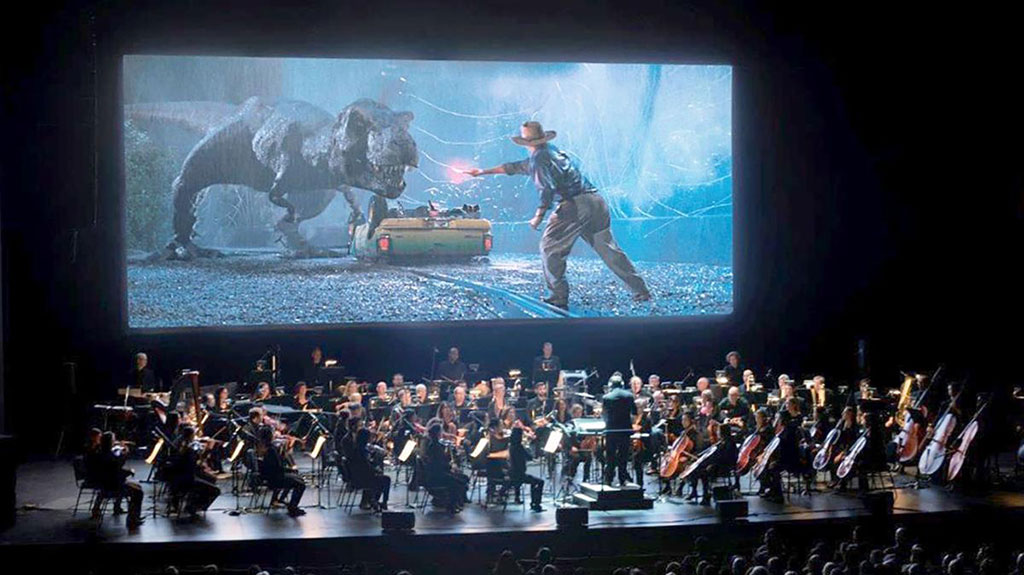 I was eight when I watched my first English film. Like the most other mofussil town millennials growing up in India, Steven Spielberg’s Jurassic Park was my first English film too. At the time, I wasn’t able to differentiate John Williams’ rapturous score from T. Rex’s thunderous roar, among the sounds I heard while watching the film. The next ten years, I grew up in the modest city of Salem, in the state of Tamil Nadu, utterly oblivious to the existence of the music of Jurassic Park.

Fifteen years later, I watched the film again in a movie theatre in Bangalore, when it was released in 3D. I was now familiar with the music of the film, familiar enough that I would spontaneously hum the main theme in the shower. The IMAX 3D technology that was meant to take me closer to the reach of the tooth and claws of the tyrannosaurus flung me deeper into the swells and stingers of John Williams’ brisk and busy orchestral score. I was eight again, awestruck this time by the power of music I thought I knew well.

Little did I know then that I will one day be part of an even richer immersive experience of the film and its music, and that I will get more intimate with the intricacies of the score. It happened in September 2018, when I attended the event Jurassic Park Live in Concert at the Royal Albert Hall, London. I watched the film in a dark, enclosed space, with about five-thousand people in the audience with me. A hundred musicians from the Czech National Symphony Orchestra were on the stage, performing the film’s score live, in perfect synchronisation with the film.

The projected film was the original theatrical version with all the constituent audio layers except the pre-recorded musical score, which the orchestra (conducted by Ben Palmer) played live. Like a singer singing to a karaoke version of a song, the orchestra played to a scoreless film. Seated front and centre on the stage was the orchestra. The screen floated above and behind the musicians, veiling the grand central pipe organ installation. The musical score in a film is non-diegetic: the source of the sound of the score does not exist within the film’s universe. This esoteric theoretical definition was made intelligible to the common man with the source of the sound—the performing orchestra—placed in a visible, physical space outside the film.

Twenty minutes into the film, the theme park’s first-ever visitors are on a tour vehicle, entering its verdant forest lands. The camera moves closer and zooms into Doctor Grant’s (Sam Neill) face. He is looking at something, transfixed. We don’t yet see what he sees. He seems both astonished and terrified. Here, in the moments before the first sight of the dinosaur, I was expecting the orchestra to play the slow and subdued four-note French horn prelude to the main dinosaur theme, as it is heard on the soundtrack album. The orchestra played something else: murmuring strings and tense, foreboding low-bass brass tones. The tension soon dissipated to a sudden relief the moment the dinosaur appeared, and the orchestra soared, now playing the main theme—a grandiose hymn hailing the might and magnificence of the dinosaur. Bold and bright. Because the calm French horn prelude pre-empts the eventual elation, the creators seem to have chosen to underscore the shots of ambiguous facial expressions with a hint of menace instead. Any number of times of watching the film at home wouldn’t have revealed this detail.

The sight of one hundred musicians playing frantically forces you to listen to everything you wouldn’t pay attention to otherwise in a score: the resonant and tonal and the dissonant and atonal, indelible leitmotifs, and also the interstitial, non-recurring, chaotic, incidental cues. With the score foregrounded, when even a brief, unassuming piece of music goes slightly off sync with the picture, the incongruence is felt like that moving body part you aren’t conscious of until it is injured. The ebbing and flowing of the musical score must be precisely synchronized with the spatial, emotional and temporal contours of the moving images, for the collective art object to be effective. Like the orchestra’s playing in the dinosaur introduction scene.

The harmless, herbivorous creature leaps, reaching for leaves high atop a tree. As its front legs go up in the air in slow motion, layers upon cascading layers of woodwinds and strings were played in quick succession and in ascending octaves, the first three notes of the definitive dinosaur theme. When the legs hit the land again, they do so with a loud, exaggerated thud, and coinciding with that sound was the cymbal-crashing orchestral burst. The swelling Czech orchestra released the built-up tension with a bang, precisely at the second that it should. The cumulative shudder reverberated in every nook, pillar, atom, and soul in the concert hall.

When a musical cue is played live to picture, interpretative tweaks in the cue’s original tempo or its entry point in the film aren’t allowed. However, at times, for practical purposes, certain aspects might be altered without weakening the effect. The original recorded score for the opening titles of Jurassic Park has synthesized sounds—pithy taiko drum strokes followed by a signalling hoot from an eastern bamboo flute. But during the concert, taiko beats were played on timpani, and the breathy bird-call surreptitiously came from an English flute. This slight sonic infidelity to the original didn’t mar the experience, but it made me mull over foreseeable problems in executability, and effectiveness of such events in the future, for the contemporary Hans-Zimmerian scores are synthphonies: the number of synth stretches that are irreproducible live far exceed the performable acoustic, orchestral parts.

In the crowd leaving the hall post the Jurassic Park concert, I saw an inspired kid running around bowing the strings of an imaginary violin. Perhaps, two or three decades hence, a kid leaving the hall after watching a popular film of the 2010s with live music would be seen pressing buttons, switching plugs and turning knobs on an invisible analogue synthesizer console. Or, perhaps not.

We come to the difficult question of what is considered a human performance or a creation in an increasingly digitized world. The live performance of Vangelis’ all-synth brooding electronic score for the film Blade Runner, by a “14-piece musical ensemble featuring synthesizers, strings, brass, bass and percussion” is happening later this year at Royal Albert Hall. Maybe I will have an answer when I watch it. Or, maybe not.

P. S. Sureshkumar is a film score fanatic. He has been writing about film scores on his blog for over ten years. He studied mechanical engineering, and he has been working as a software engineer for over fourteen years. He can always be found in transit between his hometown Salem, and London, and on Twitter at @ursmusically or at @FilmScoreFandom.