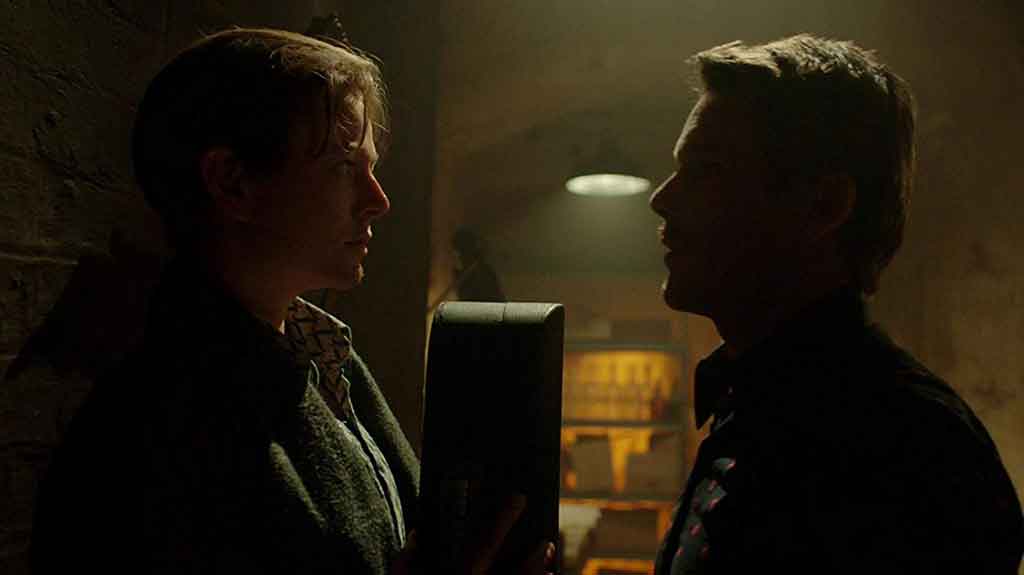 Hollywood! The dominant player in the movie business. The place where billions are invested (or just spent?) every year, for a handful of films. Some of them worth the price of the ticket, some of them not. Regardless, Hollywood films are mostly known to offer a spectacle. Every year, the resolution gets higher, the visual and sound effects more impressive, the final cut on the silver screen more eye-catching than the year before.

Where does it leave independent cinema with though? Who invests? How much? What are their criteria? The questions are many, and every answer generates only a dozen more questions. In the future, I may sink my teeth into those questions and give you as much information as I can. Stay tuned!

In the meantime, I would like to turn the spotlight onto films that independent producers and filmmakers believed in, gathered their finances and dared to bring to life, not knowing what the audiences’ perception would be. My intention is to create awareness and pique your interest in my personal top 5 indie, low budget and utterly mind-bending films. You may or may not have watched or heard of them, but if you have, feel free to spread the word. Whether they are your cup of tea or not, whether their message comes across or not, they will definitely open your eyes to… a different kind of cinema.

The article is spoilers-free, enjoy reading! 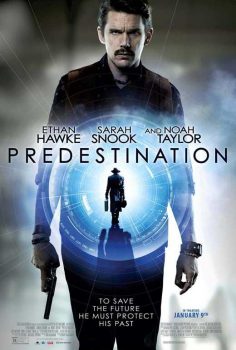 A time-travel agent receives one last assignment linked to an early case that changed his life in a way he has yet to discover.

If you think the logline is perplexing, wait until you watch the film itself. Predestination is the poster child of mind-bending films. An Australian drama/mystery/sci-fi film that fries brain cells. Robert A. Heinlein’s short story All You Zombies (1959) has been faithfully adapted—with minor modifications—by the Spierig brothers who, once more, successfully, collaborated with Ethan Hawke six years after the incredible Daybreakers (2009).

Predestination was funded mostly by Screen Australia (USD $5.6M), it is not known exactly how much more money was invested. As per Box Office Mojo, it made $68,372 worldwide, while IMDb claims it made $4,824,499. Either way, the numbers are shockingly bad, not very encouraging when considering wide releases for films of that sort. It was the fans who made it relatively well-known, I suspect whoever watched it, picked up the phone and called their nerdy mates, asking them to watch it as well.

Acting, directing, photography, editing, visual and sound effects, costume design… everything is stupendous. But the story’s and the script’s intelligence is uncanny. John’s quote: “I’ve changed so much. I doubt my own mother would recognize me…” is one of the many quotes that, once you reach the end of the journey, sends chills down your spine. 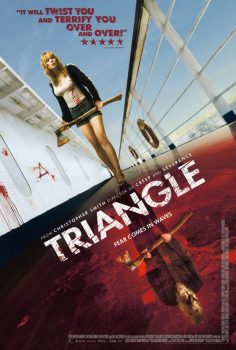 A yachting trip takes a turn for the worse for a group of friends when the yacht capsizes; they have to take refuge on what appears to be an abandoned cruise ship.

Triangle is not slasher-horror (as I’ve repeatedly read) and does not rely on jump scares to impress. Also, it is not one of the films where nothing makes sense until the end, leaving you wondering days after, “What on earth did I just watch?” Pay attention to the ballroom, the axe, the message written on the mirror: all references to The Shining (1980), not intended to be a copy, but as a way to convey meaning. What does the name of the ship mean? What did the name represent in Greek mythology? Who might the Driver be and how can the dialogue between him and Jess be interpreted?

Triangle is a British/Australian psychological fantasy/mystery/thriller that did not get the attention it deserved. It cost approximately USD $2.8M, did not receive a theatrical release in the US, and did not make its money back. It is not experimental or avant-garde, where utterances and actions are open to interpretation. Everything. Happens. For. A. Reason. Writer-director Christopher Smith delivers a feature that may just as well be a ninety minute episode of The Twilight Zone (1959), and Melissa George, one of the best hidden gems in the industry, plays the part as she should have. To understand why she acts the way she does, keep an eye even for signs on the road reading Return Back. 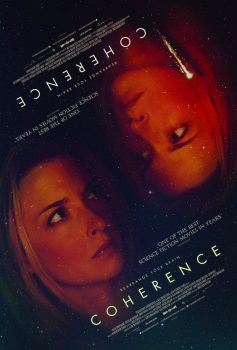 As a group of friends enjoy their dinner party, a comet causes a reality warping, pushing them into paranoia.

If you know nothing about the film when you encounter it, keep it that way. Turn the lights off and put the film on! Coherence is not Predestination or Triangle. It is neither meticulously scripted nor carefully executed. Not everything you see is there for a reason. The dialogue doesn’t create a thorough meaning. Coherence is the paragon of the indie, low budget, single location, mind-bending horror/mystery/sci-fi that, through largely impromptu dialogue and genuine reactions, makes you question who you are, who you could have been, in multiple, alternate, fractured realities. A round of applause for the director, the production team, and the actors who achieved this with $50K, in 5 nights, with 2 cameras, in 1 location. The film made $102,617 (double its cost), but was released in only 7 theatres. By far, it didn’t find a large audience. Once more, its genuine brilliance travelled, through word of mouth, by real fans of the genre.

A piece of advice: Inevitably—and instinctively—you will try to rationalize and keep track of what, why, when, and where. When you start feeling electroencephalographically challenged, STOP!

A man of unknown origin shows up at a married couple’s house with a mysterious box, and inconceivable events make them question the nature of the world as they know it.

Based on Richard Matheson’s incredible short story Button Button (1970), Richard Kelly, writer-director of the groundbreaking Donnie Darko (2001) co-writes and develops The Box. A drama/fantasy/mystery built around a moral dilemma, with arguments and counterarguments that can last for aeons. Even though it is a character-driven story, the events taking place are beard-scratching and thought-provoking. What do we know about the world we live in? Who is in charge? Who is really in charge? Do we want to see or do we choose not to? The film’s philosophy is simple: You are free to choose, you are just not free of the consequences.

Having been adapted first as a Twilight Zone episode (1986), The Box gets released in 2009 and… nothing happens! No one finds out about it. It goes totally under the radar and stays there. “My hope is to make a film that is incredibly suspenseful and broadly commercial, while still retaining my artistic sensibility,” said Kelly. And that’s exactly what he did, though the film just didn’t become broadly commercial. Kelly takes us back to 70s suburbia, paying tributes to Carl Sagan and H. Beam Piper (The Day of the Moron). With a budget of just over $30M, The Box made $33,333,531 worldwide, receiving mostly mixed reviews. Personally, I highly recommend The Box. But the numerous friends and acquaintances I talked about this movie had only one response: “What’s that?” 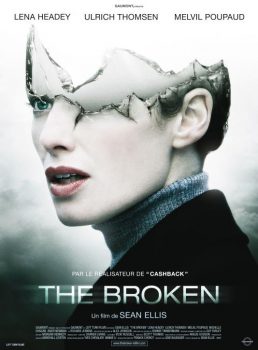 After a woman sees herself driving on a street in London, a chain of obscure and twisted events lead her to an old, broken mirror.

Last but not least, I have for you The Broken. Possibly, the only film of its kind that people find even more unfamiliar than The Box. Sean Ellis, one of the most underrated British directors (Cashback, 2004), dares to write and direct an intellectual drama/horror/thriller of European standards, that will be imprinted into your brain. Conceptualising the myths surrounding doppelgängers, it delves into what the modern, progressive world—London in this case—considers superstitious, exploring human nature’s obscurity and what may lie beneath the surface. Ellis’ abstract, slow-paced horror will glue you to your seats, but the ominous RealFeel cerebral goosebumps come at the end, way past the film’s end credits. Poe-style writing, translated to the big screen, waiting to be comprehended and related to.

The Broken premiered at the 2008 Sundance Film Festival, got one win and one nomination at the Sitges (Catalonian International Film Festival), was a first choice at Horrorfest 2009… and it stayed there. As per IMDb, it cost approximately GBP £4M, and made a cumulative USD $889,510 worldwide. The Broken is a British/French production which has remained, to this very day, widely unknown.

As a young adult, I blamed Hollywood. I held it responsible for producing, promoting, and distributing, among others, micro-budget horrors that relied heavily on jump scares, providing spoon-fed answers and having no substance. Later, I realised that it only responds to demands. Whatever sells tickets gets made. Is the audience to blame? Mediocrity sells, is that it? Are people unwilling to spend money on something that will keep them up when they go to bed, that will stay with them long after they leave the cinema?

There is no one to blame really, and there is no point in throwing stones. It seems as if thought-provoking films are not meant for the big screen; just for home entertainment. Maybe the good old-fashioned cinemas will bring together the cinephiles, feeding their passion for the antithetical, the alternative, and the experimental. And the multiplex in the huge, fancy malls will satisfy the needs of the masses. The world of cinema is small, but big enough to embrace diversity.

Below, you can find my list of mind-bending films that did make it to the cinemas: low, mid, or high budget. Some of them tanked, some made their money back, and very few became blockbusters. It was quite a tough call to choose just five films, but I hope they represent and support the point I am trying to make.

Hollywood often runs out of ideas (hence the incalculable reboots and remakes). The few innovative ideas will impress for a while, but it isn’t long before they are beaten to death and become cliches. Then, out of nowhere, a prodigy will come out with an indie, made on budget of two and a half lemons, and will be “recruited” straight away. The prodigy then will either change the rules as we know them, or become one among many, blinded by fame and money, sinking into the Hollywood abyss.

Prodigy or not, whoever you are, if you are out there filming, please keep changing the rules.

Thank you for reading!

As always, I visit a number of websites for my research. I hope I have remembered to list them all:

Konstantinos got into TV and Film production immediately after school. He has been studying and working in this field ever since. In 2011, he won the Nostimon Imar Award (Best Greek Director Abroad) for his short film Ithacathat he wrote, edited and directed. The following year, he donated his documentary Asperger Syndrome: Myths & Reality to the National Autistic Society in the U.K. Konstantinos lives and works in the U.K. as a freelance Video Editor and Camera Operator for corporate videos, fashion shows, and documentaries. He is currently pursuing a PhD in Film at the University of Nottingham and reviewing films on his own blog.