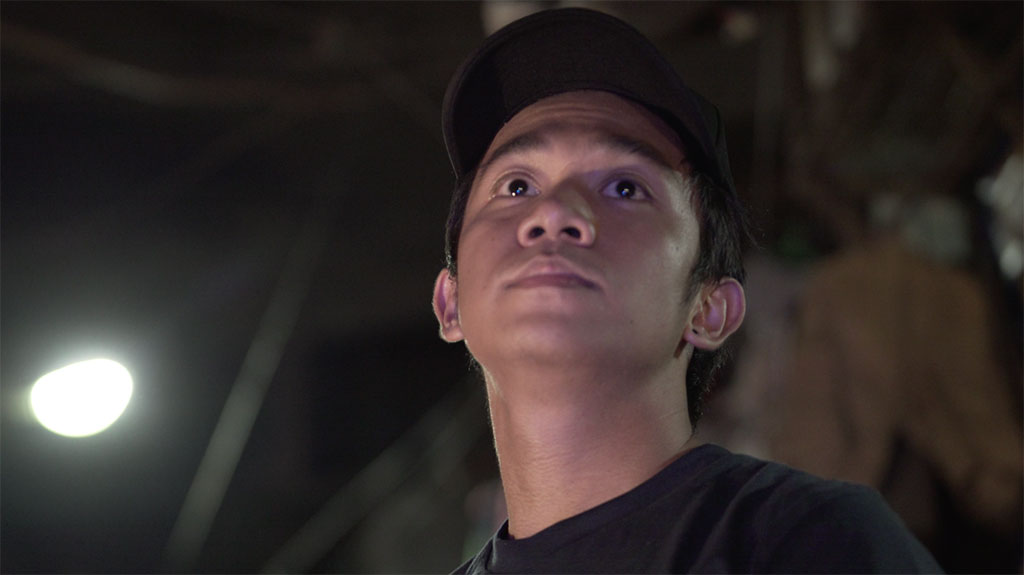 Born in Makati City, Philippines, Raymund Ribay Gutierrez is the first Filipino director to compete for the Cannes Palme d’Or twice, with his short films Imago and Judgement. Mentored by Filipino auteur Brillante Mendoza, Verdict is Gutierrez’s debut feature film. It premiered at the Venice Film Festival and received the Special Jury Prize.

In Verdict, Dante, a small-time crook, comes home in an alcohol-fuelled rage and viciously attacks his wife, Joy, and their six-year-old daughter, Angel. To protect herself and Angel, Joy stabs Dante in the arm before fleeing to the nearest police station to file a complaint. At the station, she is humiliated and threatened by law enforcers, and soon realises that finding justice is an uphill battle.

After watching Verdict at the Singapore International Film Festival 2019, Ramchander reached out to the director with questions on his filmmaking process and philosophy.

I simply wanted to bring motion to the posters I made during my graphic artist days. That curiosity led me to making motion pictures.

You were mentored by Brilliante Mendoza. How did his mentorship help you on this film? What did you learn from him?

Brillante is not the traditional mentor that we know of. He is the kind of mentor that will show you the reality of the film industry and let you decide whether to pursue this path or not. This is much more helpful than giving false hopes or motivation. He taught me how to approach opportunities, co-workers and attitudes with discipline.

Verdict details with great care the court procedures, the lives of people and their immediate environs. Which film or filmmaker was an inspiration for this?

I was mostly inspired by French and Polish films—depicting reality and the mundaneness of a certain milieu as we capture visually engaging stories.

In an interview you mention a theory of “found filmmaking, which was founded by Bing Lao, the mentor of Brilliante, and in this theory, you have to tell your stories all the time in one sentence.” Could you tell us more about this theory and how you applied it while shooting Verdict?

For us to communicate clearly through our visuals and stories, we must master the use of film language. Found Story is a type of film narrative that communicates life. It is derived from a certain topic or event, and usually framed sociologically. It helps you identify the best way of telling a story, so as to communicate and engage with your audience.

There are many shots in the film that focus on the tattoos Joy Santos has on her body. Was there any specific reason you chose to do this?

It doesn’t have any deeper meaning other than its function as a display of art. I wanted to convey that Joy is a colourful human being, like the people I have interviewed in preparation for this movie. They are also humans with hobbies and vices, it just so happens that she is the victim of an abusive husband.

Were you nervous or unsure about anything while starting work on Verdict?

The only thing I was nervous about is the extensive use of dialogues. As an Asian filmmaker, we tend to use subtitles, and this distracts me. Subtitles get too much attention compared to the picture itself. But there is naturally dialogue in court, I can’t do anything about it. It is part of the process.

As part of research for this film, you mentioned that you interviewed lawyers, victims of domestic abuse, and abusers. You also took a crash course in law. When you do a lot of research, there is a risk of stuffing the film with too many details that deviate from the narrative. How did you avoid this?

Yes, information can be overwhelming during the research process, so I’m always mindful of what the story is about. I will start by writing a simple outline based on my interviews, track all of the blind spots in my narrative line that I wasn’t aware of, and fill up those gaps.

You mentioned during the post-screening Q&A that you let the research guide your script. Could you explain, maybe with an example, how much the story in your head changed before and after doing research?

It is important to make outlines before writing a script. Sometimes you find something more interesting than the ones you have in mind. In this case, when you have outlines, you will tend to have an overview of the whole story, and you can think if your change is working or not. That is when I shift perspectives and rewrite the outline.

How many drafts of the screenplay did you write? Did any of the drafts have a different beginning or end? Specifically, did you consider starting the film after the fight so that audience don’t get to see what actually happened between the couple that night?

Originally, the story started with Joy already in the police station, bruised and battered, filing her complaint. But after the 15th draft, I thought that showing the fighting scene is critical, so that the audience knows the truth going into the film; because this story is not about finding the truth. Rather, it is about pursuing the truth against impractical procedural justice.

Caption: “This story is not about finding the truth. Rather, it is about pursuing the truth against impractical procedural justice.” — Raymund Ribay Gutierrez

You mentioned in an interview that you worked with professional and amateur actors and gave them the script for each scene only on the day of the shoot. Could you give us an example when this spontaneity created a moment that was never in your script and surprised you?

My actors and I have the same vision and treatment for filmmaking in mind. It made spontaneity very natural on set. I share how I plan to shoot with my actors, and hear them out as they make adjustments. I always tell my actors to surprise me and just react naturally to the situation. As long as they don’t hear the cut, they must continue acting, and anything may follow.

Kristofer King, one of your lead actors, has won the Best Performer award for Verdict at SGIFF 2019. His body language as Dante Santos is unpredictable, almost like a lizard. This adds to the tension because the viewer feels the actor might explode at any moment. Did you have any real life character as a reference for this or did you work with the actor’s natural body language?

Kristofer King understood his character, Dante, so much that he tends to transcend and add more to what I have written. That for me is an excellent actor.

In an interview you mentioned, “I know I am making an art film and not mainstream… I’m not expecting a lot from the Filipino audience. We have a difficult situation living in the Philippines and thus, I can’t blame them for wanting to watch escapist films.” Do you think this gap between mainstream and art films needs to be bridged? Why or why not?

It depends on what the intention of the filmmaker is. It is possible to combine the two but there will always be a compromise between commerce and arts. There is no equal proportion of form and content.

When you look back at Verdict today, what do you think you could have done differently?

I thought of several things but rather than wasting my time, I would like to move on and do another film, and maybe apply the things I have in mind there. At the end of the day, there is no perfect film, even the best films ever made.

What are your plans for the future? Do you want your subsequent films to be of different genres or do you see yourself making more films that are closer to reality?

I want to challenge myself in what I do. Be it genre, arthouse or experimental films… it is about constantly learning and applying epiphanies from life and the craft. I would like to create art that carries the realities of today and will shape the future.

Special thanks to Leck Choon Ling and the SGIFF 2019 team for making this interview possible.