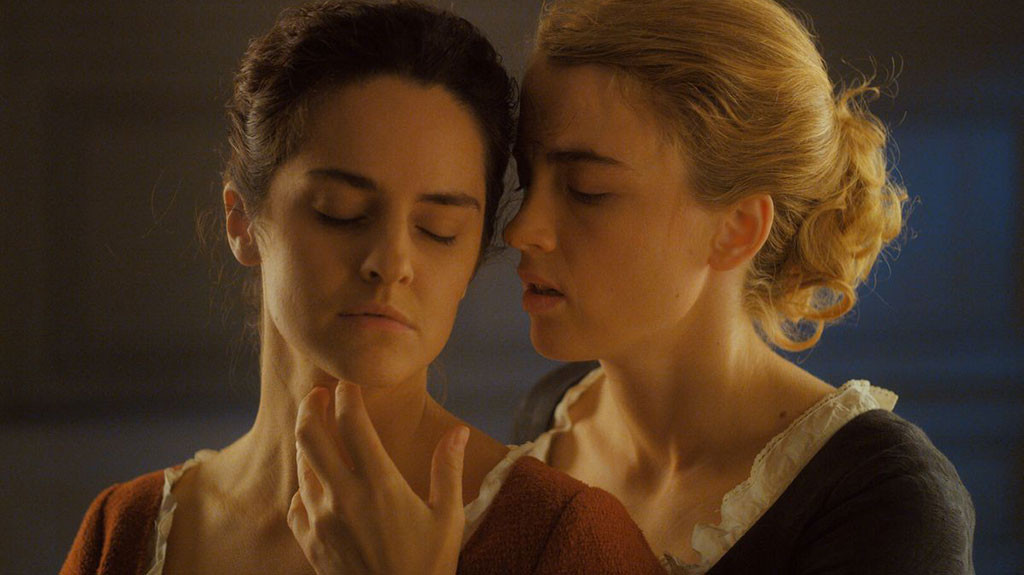 I generally don’t watch movies, or even much television. Give me a spare moment and I will either head out for a walk, pick up a book, or take a nap. Most evenings find me passed out on the living room couch, my dog tucked into my side, and a book somewhere within reach. But every once in a while, I fall in love with a movie. And my love is complete. I replay the movie repeatedly in my mind.

Portrait of a Lady on Fire is a painting you can not look away from, or a tremendous piece of music you find yourself listening to on repeat, a book whose characters people your mind. The last movie to affect me this way was The Piano, which opened with Ada and her daughter being rowed ashore in much the same way that Marianne (Noémie Merlant) is rowed ashore in Portrait of a Lady on Fire. There are other similarities between these two movies: both feature strong female characters, illicit desire, breathtaking cinematography, and emotions finding expression through art. Sometimes, when I look at a painting, I can’t look away. Andrew Wyeth’s Wind from the Sea was the first painting to call out to me in that intimate way. There is remarkable stillness in that painting. A silence. Intimacy too. You are standing in the attic with Wyeth, looking out the window, listening to the wind rustling the gauzy curtains.

“But if a painting really works down in your heart and changes the way you see, and think, and feel, you don’t think, ‘oh I love this picture because it’s universal’ ‘I love this painting because it speaks to all mankind’. That’s not the reason you love a piece of art. It’s a secret whisper from an alleyway. Psst, you. Hey kid. Yes, you. An individual heart shock. Your dream. You see one painting, I see another, the art book puts it another remove still, the lady buying the greeting card at the museum card shop sees something else entire, and that’s not even to mention the people separated from us by time – four hundred years before us, four hundred years after we’re gone – it’ll never strike anyone the same way and the majority of people it will never strike in any deep way at all but – a really great painting is fluid enough to work it’s way into the mind and heart through all kinds of different angles, in ways that are unique and very particular. Yours, yours, I was painted for you.”

Portrait of a Lady on Fire is set in 18th century Brittany. It is a movie entirely about women. Well, that’s an unfair statement. The only men you actually see during the 120 minutes are periphery characters: men rowing a boat in the opening scene, a porter towards the end. But men are present throughout in other ways. It’s a heavy presence.

Marianne has been commissioned to paint Heloise for a suitor. If the painting pleases him, he will marry Heloise. This is a marriage Heloise (Adèle Haenel) does not want and therefore, she refuses to pose. Marianne paints her by subterfuge. Heloise is led to believe that Marianne is a walking companion, and during their walks, Marianne studies Heloise, memorizing her features, committing her to memory. But as Heloise explains to Marianne later, the watcher was being watched. The two women look, the looking develops into longing, and the longing into love. However, unlike most movies or books which deal with the power of the gaze, in this one, there is an equal power balance between the one looking and the one being looked at. The two are interchangeable. Marianne eventually paints the picture which seals their fate forever. This is a movie about painting, about music, about how looking and talking lead to intimate connections. This is a movie about secrets. Marianne and Heloise can only love in secret. They are denied the pain and the pleasure of a shared life, or a love seen through to its natural end, but there is poignancy in this denial, the forced goodbye.

I suspect that there are few movies as well written as this one. Like a set of Russian dolls, or a lover slowly casting away layers to reveal something deeper about themselves, Portrait of a Lady on Fire draws you into itself. There are stories within the main story: the story of Heloise’s mother (Valeria Golino), her arranged marriage and her isolation; the story of the maid, Sophie (Luana Bajrami) and her unwanted pregnancy; the story of a female artist told through Marianne, what is allowed to her as a woman and an artist, and what is denied. And then there are the stories which we are left to imagine, the stories of the men not shown: Heloise’s father, her suitor and eventual husband, and the man who impregnated Sophie. Men whose presence is marked only by their absence.

There is beauty in the way this film has been shot. So many of the scenes are visually memorable. We see women walking along the beach, a group of women singing around a bonfire. We see the way the two lovers look at each other, their tender lovemaking. And the moving last scene, in which Marianne watches Heloise cry, while listening to an orchestra play Marianne’s favourite piece of music.

There is beauty in the dialogue as well. One of my favourites was Marianne and Heloise’s conversation about Orpheus, Eurydice, and Hades. Orpheus asks Hades, the god of the underworld, to return his wife to him. Hades agrees to let Orpheus take Eurydice back to the land of the living, but with one stipulation: he must not turn around and look at her. Of course he does, and she turns to stone. Marianne feels that Orpheus chose to turn back and look. She feels that instead of making the lover’s choice, he made the poet’s by choosing the memory of her over her, much like the choice Marianne herself made in the end Perhaps that was just me reading my own longings into the movie.

There is a scene in this film, of women singing around a bonfire. Celine Sciamma wrote the lyrics in Latin; Fugere non possum which means “they come fly.” One can feel sparks of desire fly between Marianne and Heloise as they stand around the fire. The singing builds to a fever pitch and Heloise’s dress actually catches fire. The other women put out the literal fire, but it is also at this point that Marianne and Heloise decide, without speaking a word, to act on their feelings.

“The way her body existed only where he touched her. The rest of her was smoke.”

[1] ‘Portrait of a Lady on Fire’ Cinematography: The Perfect 18th Century Digital Painting by Chris O’Falt. Published in IndieWire on February 28, 2020. Accessed on February 29, 2020.

[2] Portrait of a Lady on Fire: The Real-Life Love Story Behind the Scorching Film by Julie Miller. Published in Vanity Fair on February 14, 2020. Accessed on February 29, 2020.

Tehmina Khan has her home in Toronto, where she lives with her husband, two children, and their dog, Luna. Mawenzi House published her collection of short stories, Things She Could Never Have, in the fall of 2017. She is currently working on retelling seven stories from 1001 Nights. Her writing has appeared in The Blue Minaret, ShedoestheCity, and The /temz/ Review.